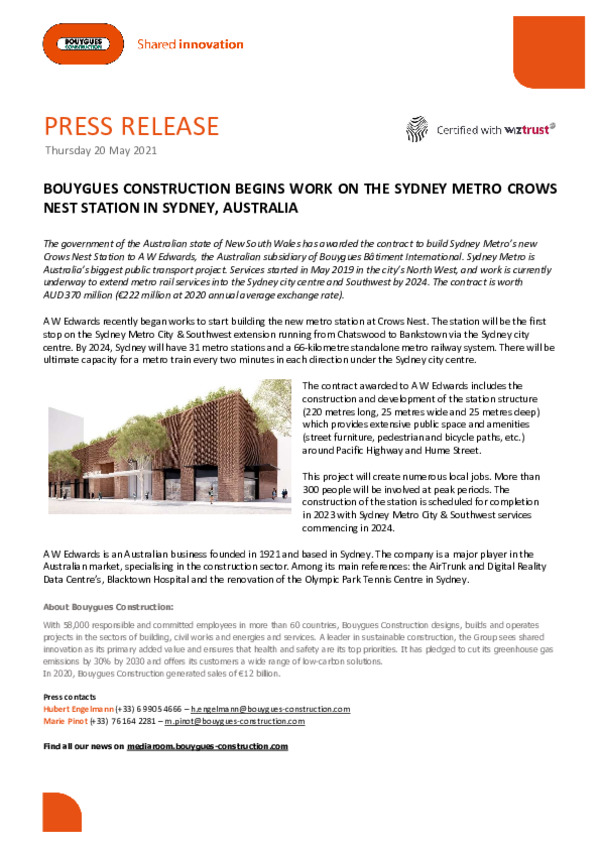 The government of the Australian state of New South Wales has awarded the contract to build Sydney Metro’s new Crows Nest Station to A W Edwards, the Australian subsidiary of Bouygues Bâtiment International. Sydney Metro is Australia’s biggest public transport project. Services started in May 2019 in the city’s North West, and work is currently underway to extend metro rail services into the Sydney city centre and Southwest by 2024. The contract is worth AUD 370 million (€222 million at 2020 annual average exchange rate).

A W Edwards recently began works to start building the new metro station at Crows Nest. The station will be the first stop on the Sydney Metro City & Southwest extension running from Chatswood to Bankstown via the Sydney city centre. By 2024, Sydney will have 31 metro stations and a 66-kilometre standalone metro railway system. There will be ultimate capacity for a metro train every two minutes in each direction under the Sydney city centre.

The contract awarded to A W Edwards includes the construction and development of the station structure (220 metres long, 25 metres wide and 25 metres deep) which provides extensive public space and amenities (street furniture, pedestrian and bicycle paths, etc.) around Pacific Highway and Hume Street.

This project will create numerous local jobs. More than 300 people will be involved at peak periods. The construction of the station is scheduled for completion in 2023 with Sydney Metro City & Southwest services commencing in 2024.

A W Edwards is an Australian business founded in 1921 and based in Sydney. The company is a major player in the Australian market, specialising in the construction sector. Among its main references: the AirTrunk and Digital Reality Data Centre’s, Blacktown Hospital and the renovation of the Olympic Park Tennis Centre in Sydney.