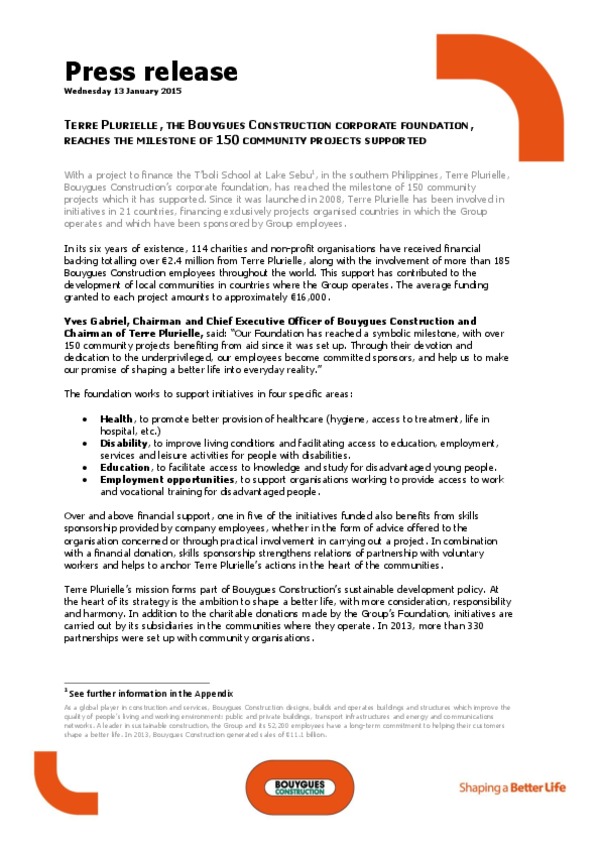 With a project to finance the T’boli School at Lake Sebu[1], in the southern Philippines, Terre Plurielle, Bouygues Construction’s corporate foundation, has reached the milestone of 150 community projects which it has supported. Since it was launched in 2008, Terre Plurielle has been involved in initiatives in 21 countries, financing exclusively projects organised countries in which the Group operates and which have been sponsored by Group employees.

In its six years of existence, 114 charities and non-profit organisations have received financial backing totalling over €2.4 million from Terre Plurielle, along with the involvement of more than 185 Bouygues Construction employees throughout the world. This support has contributed to the development of local communities in countries where the Group operates. The average funding granted to each project amounts to approximately €16,000.

Yves Gabriel, Chairman and Chief Executive Officer of Bouygues Construction and Chairman of Terre Plurielle, said: “Our Foundation has reached a symbolic milestone, with over 150 community projects benefiting from aid since it was set up. Through their devotion and dedication to the underprivileged, our employees become committed sponsors, and help us to make our promise of shaping a better life into everyday reality.”

The foundation works to support initiatives in four specific areas:


Over and above financial support, one in five of the initiatives funded also benefits from skills sponsorship provided by company employees, whether in the form of advice offered to the organisation concerned or through practical involvement in carrying out a project. In combination with a financial donation, skills sponsorship strengthens relations of partnership with voluntary workers and helps to anchor Terre Plurielle’s actions in the heart of the communities.

Terre Plurielle’s mission forms part of Bouygues Construction’s sustainable development policy. At the heart of its strategy is the ambition to shape a better life, with more consideration, responsibility and harmony. In addition to the charitable donations made by the Group’s Foundation, initiatives are carried out by its subsidiaries in the communities where they operate. In 2013, more than 330 partnerships were set up with community organisations.
[1] See further information in the Appendix

Educating children to respect their culture in the Philippines
At Lake Sebu, in the southern Philippines, Terre Plurielle is supporting the initiative of France Tiboli Solidaires, a charity founded in 2010 by the family of an employee of our subsidiary, VSL, to support the School of Indigenous Knowledge and Traditions, a free elementary school with around 140 pupils, which specifically teaches indigenous T’boli customs. Financial aid from the Foundation helps fund the salaries of the teachers and pays for the upkeep and renovation of the school, under the supervision of the project sponsor and his wife. 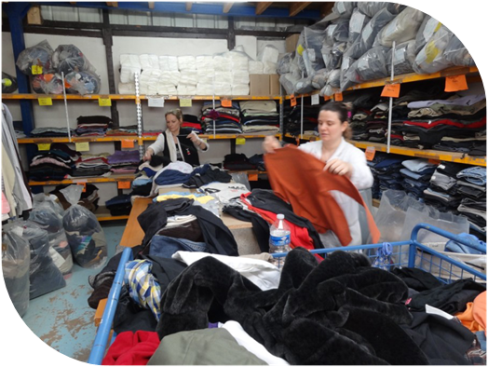 An integration workshop for recycling second-hand clothing
For the second time, Terre Plurielle is providing aid for Le Grenier, an organisation founded in Le Havre, France, in 2010, which runs an integration workshop specialising in recycling second-hand clothing. After helping to finance the acquisition of equipment and providing five employees from our subsidiary, Quille Construction, to take part in building the organisation’s new premises, the Foundation is now helping Le Grenier develop its operations chiefly through the purchase of collection equipment, with the aim of creating new jobs using social integration contracts.