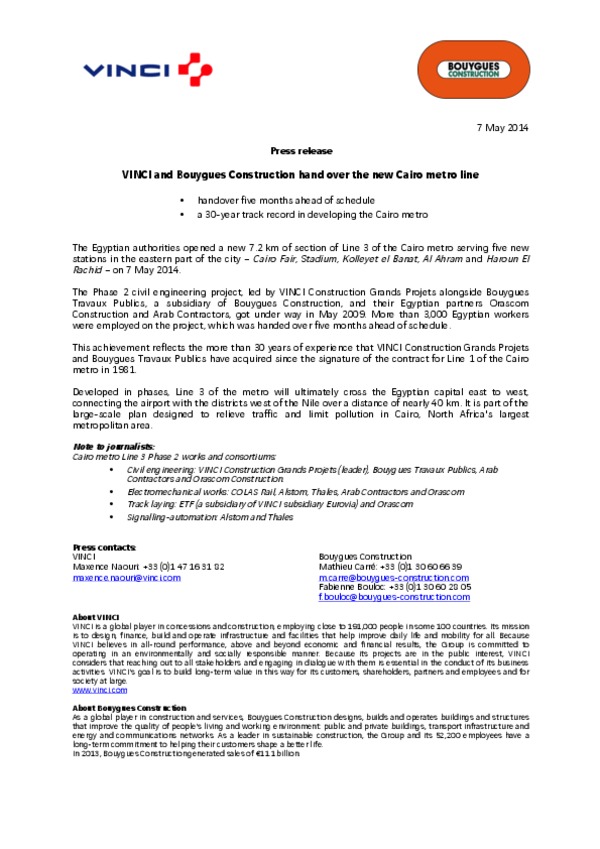 The Egyptian authorities opened a new 7.2 km of section of Line 3 of the Cairo metro serving five new stations in the eastern part of the city – Cairo Fair, Stadium, Kolleyet el Banat, Al Ahram and Haroun El Rachid – on 7 May 2014.

The Phase 2 civil engineering project, led by VINCI Construction Grands Projets alongside Bouygues Travaux Publics, a subsidiary of Bouygues Construction, and their Egyptian partners Orascom Construction and Arab Contractors, got under way in May 2009. More than 3,000 Egyptian workers were employed on the project, which was handed over five months ahead of schedule.

This achievement reflects the more than 30 years of experience that VINCI Construction Grands Projets and Bouygues Travaux Publics have acquired since the signature of the contract for Line 1 of the Cairo metro in 1981.

Developed in phases, Line 3 of the metro will ultimately cross the Egyptian capital east to west, connecting the airport with the districts west of the Nile over a distance of nearly 40 km. It is part of the large-scale plan designed to relieve traffic and limit pollution in Cairo, North Africa's largest metropolitan area.