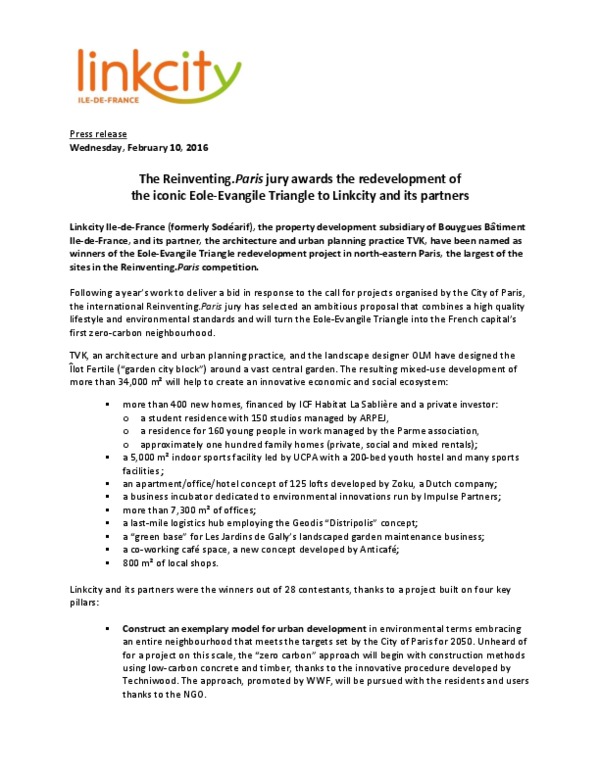 Linkcity Ile-de-France (formerly Sodéarif), the property development subsidiary of Bouygues Bâtiment Ile-de-France, and its partner, the architecture and urban planning practice TVK, have been named as winners of the Eole-Evangile Triangle redevelopment project in north-eastern Paris, the largest of the sites in the Reinventing.Paris competition.

Following a year’s work to deliver a bid in response to the call for projects organised by the City of Paris, the international Reinventing.Paris jury has selected an ambitious proposal that combines a high quality lifestyle and environmental standards and will turn the Eole-Evangile Triangle into the French capital’s first zero-carbon neighbourhood.
TVK, an architecture and urban planning practice, and the landscape designer OLM have designed the Îlot Fertile (“garden city block”) around a vast central garden. The resulting mixed-use development of more than 34,000 m² will help to create an innovative economic and social ecosystem: Linkcity and its partners were the winners out of 28 contestants, thanks to a project built on four key pillars: To make sure that its ambitions are sustained over time, the team of partners has undertaken to ensure that the spirit of these social and environmental innovations is maintained for 10 years.

The works, which will be carried out by Bouygues Bâtiment Ile-de-France, are expected to begin in mid-2018, with handover scheduled for 2021.