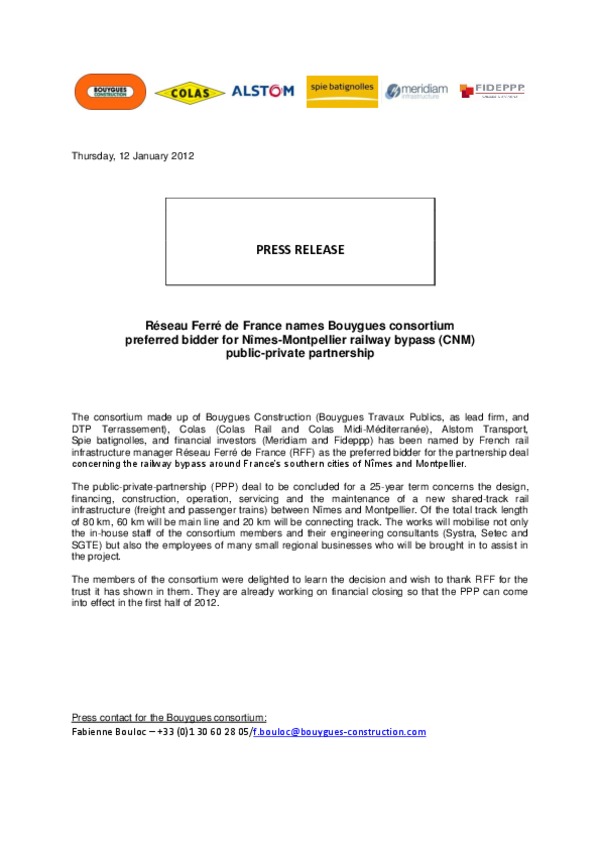 The consortium made up of Bouygues Construction (Bouygues Travaux Publics, as lead firm, and DTP Terrassement), Colas (Colas Rail and Colas Midi-Méditerranée), Alstom Transport,
Spie batignolles, and financial investors (Meridiam and Fideppp) has been named by French rail infrastructure manager Réseau Ferré de France (RFF) as the preferred bidder for the partnership deal concerning the railway bypass around France’s southern cities of Nîmes and Montpellier.

The public-private-partnership (PPP) deal to be concluded for a 25-year term concerns the design, financing, construction, operation, servicing and the maintenance of a new shared-track rail infrastructure (freight and passenger trains) between Nîmes and Montpellier. Of the total track length of 80 km, 60 km will be main line and 20 km will be connecting track. The works will mobilise not only the in-house staff of the consortium members and their engineering consultants (Systra, Setec and SGTE) but also the employees of many small regional businesses who will be brought in to assist in the project.

The members of the consortium were delighted to learn the decision and wish to thank RFF for the trust it has shown in them. They are already working on financial closing so that the PPP can come into effect in the first half of 2012.

Bouygues Construction is a global leader with top-ranking positions in the building, civil works, energy and services. It combines the power of a large group with the responsiveness of a network of local companies which deliver innovative solutions for the financing, design, construction, operation and maintenance of buildings and infrastructure. Bouygues Construction employs 54,000 people in 60 countries and generated sales of 9.2 billion euros in 2010.

About the Colas Group

The Colas Group is a leader in the construction and maintenance of infrastructure for transport, urban development and recreational facilities. With nearly 70,000 employees throughout more than 800 works centers and 1,400 materials production sites (aggregates, emulsion, bitumen, asphalt mix) in 40 countries on five continents, the Group carries out some
100,000 projects each year.

In 2010, Colas posted 11.7 billion euros of consolidated revenue (43% outside of France). The Group share of net profit amounted to 224 million euros.​

Alstom Transport develops and offers the most complete range of products and services for the rail industry, from rolling stock and signalling systems to infrastructure, services and turnkey solutions. Alstom Transport is present in over 60 countries with 25,500 employees and has announced sales of €5.6 billion for the year 2010/2011. With 8,500 employees across nine sites in France, Alstom Transport is the leading French rail manufacturing company and makes a major contribution to the vitality of local economies. One job at Alstom generates around three jobs for its suppliers. Alstom Transport people in France have the skills and know-how to serve both French and international clients. Alstom has won important infrastucture contracts such as the driverless metro in Singapore, the Shi-Tai high-speed line in China, the London-Paris high-speed line as well as  the new
Rhine-Rhône high-speed line.

Spie Batignolles is a major player in construction and public works, and also leads its market in customer relations. The group develops services packages, including Concertance®, Performance® and Présance®, that are unique to the construction industry.
Spie batignolles operates in five main sectors: construction of private and public buildings; civil engineering and foundations; public works; and property development and public service outsourcing contracts.
With 8,300 employees, the Spie Batignolles group generated revenue of €1.8 billion in 2010. It was awarded an AAA+ rating in 2009 for its sustainable development policy.

Founded in 2006, Meridiam is an independant investment fund specialised in the financing and management of long term public infrastructure projects. Meridiam currently manages around € 2,2 billion of assets in North America and continental Europe. Meridiam is the majority shareholder of the consortium led by Bouygues Travaux Publics for the Nîmes-Montpellier railway bypass.

FIDEPPP, a public-private partnership development and investment fund, was set up in October 2005. The aim is to enable the French government and local authorities to carry out their infrastructure projects with the support of the BPCE group and the Caisse d’Épargne network as lender and investor. FIDEPPP is the first French fund set up for this purpose. It is managed and represented by its management company, Natixis Environnement & Infrastructures, a subsidiary of Natixis Alternative Assets, itself wholly owned by Natixis.