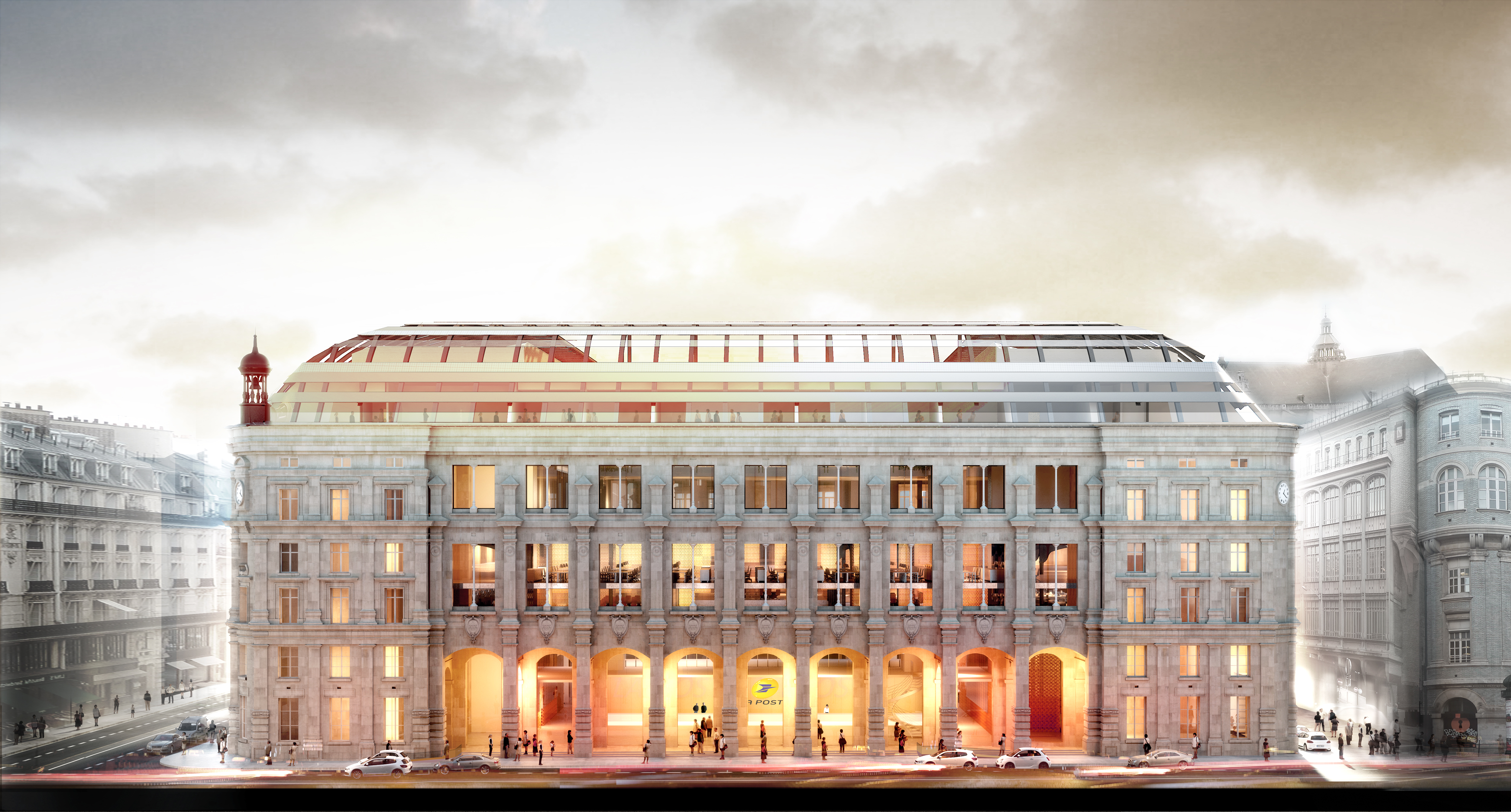 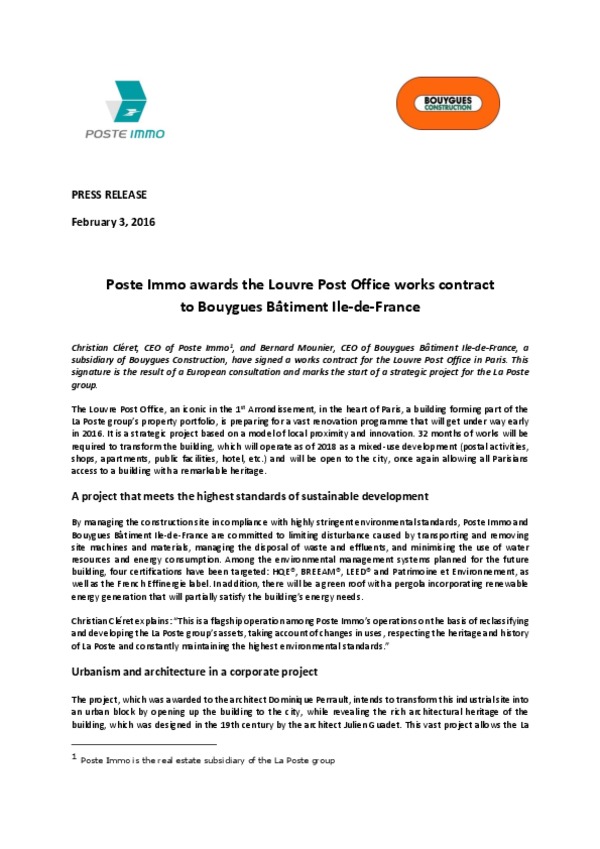 Christian Cléret, CEO of Poste Immo, the real estate subsidiary of the La Poste group, and Bernard Mounier, CEO of Bouygues Bâtiment Ile-de-France, a subsidiary of Bouygues Construction, have signed a works contract for the Louvre Post Office in Paris. This signature is the result of a European consultation and marks the start of a strategic project for the La Poste group.

The Louvre Post Office, an iconic in the 1st Arrondissement, in the heart of Paris, a building forming part of the La Poste group’s property portfolio, is preparing for a vast renovation programme that will get under way early in 2016. It is a strategic project based on a model of local proximity and innovation. 32 months of works will be required to transform the building, which will operate as of 2018 as a mixed-use development (postal activities, shops, apartments, public facilities, hotel, etc.) and will be open to the city, once again allowing all Parisians access to a building with a remarkable heritage.

A project that meets the highest standards of sustainable development

By managing the construction site in compliance with highly stringent environmental standards, Poste Immo and Bouygues Bâtiment Ile-de-France are committed to limiting disturbance caused by transporting and removing site machines and materials, managing the disposal of waste and effluents, and minimising the use of water resources and energy consumption. Among the environmental management systems planned for the future building, four certifications have been targeted: HQE®, BREEAM®, LEED® and Patrimoine et Environnement, as well as the French Effinergie label. In addition, there will be a green roof with a pergola incorporating renewable energy generation that will partially satisfy the building’s energy needs.

Christian Cléret explains: “This is a flagship operation among Poste Immo’s operations on the basis of reclassifying and developing the La Poste group’s assets, taking account of changes in uses, respecting the heritage and history of La Poste and constantly maintaining the highest environmental standards.”

Urbanism and architecture in a corporate project

The project, which was awarded to the architect Dominique Perrault, intends to transform this industrial site into an urban block by opening up the building to the city, while revealing the rich architectural heritage of the building, which was designed in the 19th century by the architect Julien Guadet. This vast project allows the La Poste group to show how it is maintaining and developing its property assets, while adapting its presence and its services in line with changes in society and in the public’s expectations.

Bernard Mounier said: “We are very proud of the confidence that the La Poste group has shown in us, which will enable us to partner it in meeting the ambitious and strategic challenge of refurbishing this historic site. Using imaginative building methods and optimised scheduling, we will carry out a far-reaching modernisation programme that is faithful to the architectural project and open to the city.”

The project will modernise the building, giving the postal workers who work there better working conditions, and offering an exemplary environmental approach, particularly with respect to energy.

Another key aspect of this project is mixed usage: the project is based on multi-purpose development, taking advantage of the site’s round-the-clock credentials (the Louvre post office is the only all-night post office in Paris) and the urban intensity of the neighbourhood. When completed, the building will house postal services (a post office open 24/7, a platform for mail sorting and distribution, a Carré Pro facility for professionals, and an urban logistics platform), amenities intended for neighbourhood life (police station, crèche, co-working space, etc.) and the local population, as well as commercial and business activities (hotel, offices, shops with long opening hours) and social housing.