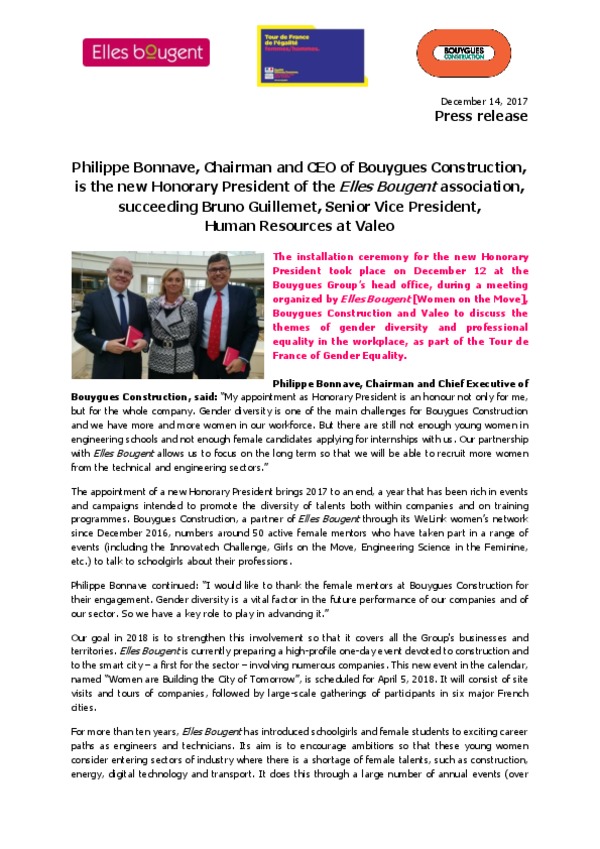 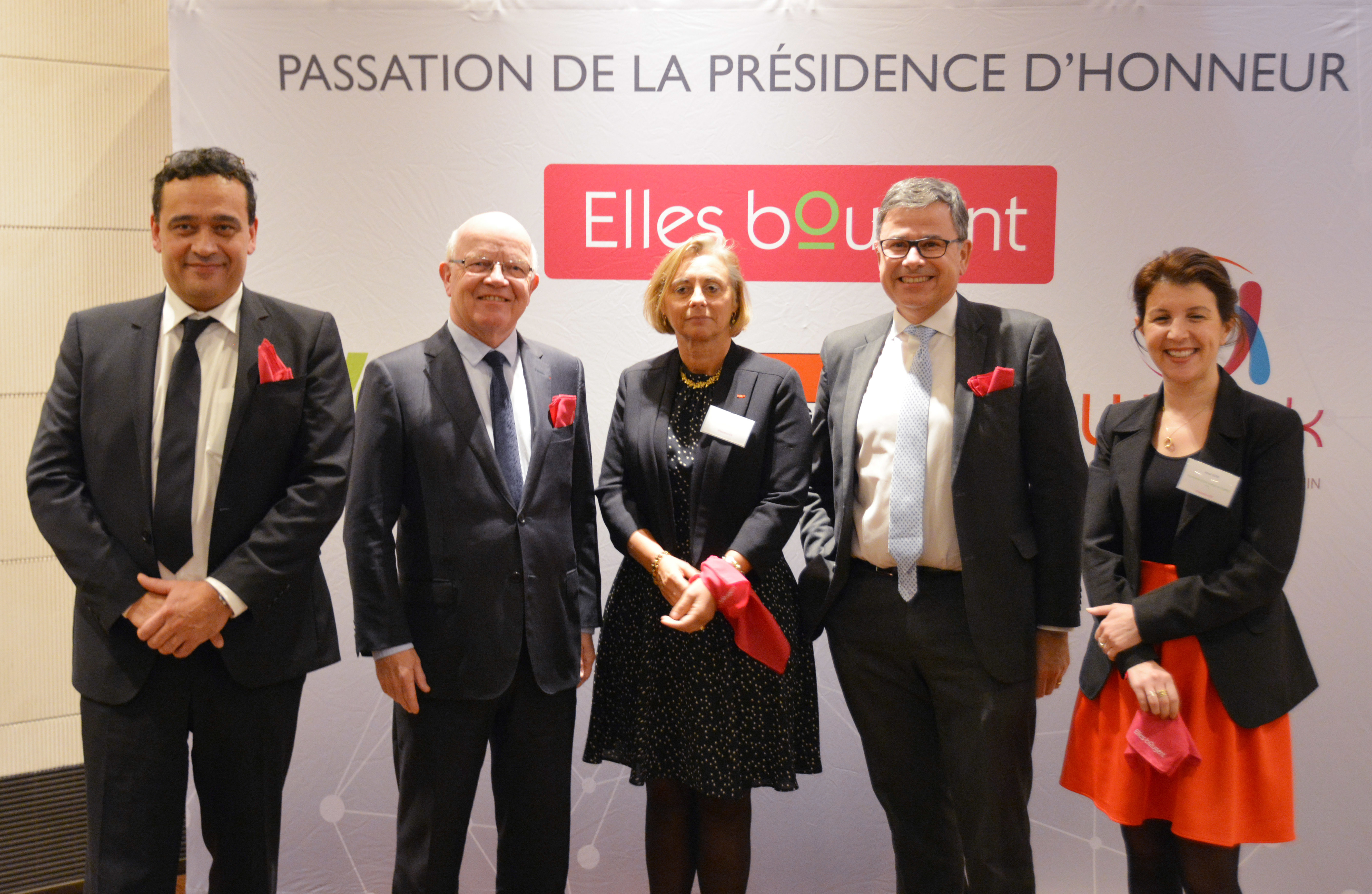 The installation ceremony for the new Honorary President took place on December 12 at the Bouygues Group’s head office, during a meeting organized by Elles Bougent [Women on the Move], Bouygues Construction and Valeo to discuss the themes of gender diversity and professional equality in the workplace, as part of the Tour de France of Gender Equality.

Philippe Bonnave, Chairman and Chief Executive of Bouygues Construction, said: “My appointment as Honorary President is an honour not only for me, but for the whole company. Gender diversity is one of the main challenges for Bouygues Construction and we have more and more women in our workforce. But there are still not enough young women in engineering schools and not enough female candidates applying for internships with us. Our partnership with Elles Bougent allows us to focus on the long term so that we will be able to recruit more women from the technical and engineering sectors.”
The appointment of a new Honorary President brings 2017 to an end, a year that has been rich in events and campaigns intended to promote the diversity of talents both within companies and on training programmes. Bouygues Construction, a partner of Elles Bougent through its WeLink women’s network since December 2016, numbers around 50 active female mentors who have taken part in a range of events (including the Innovatech Challenge, Girls on the Move, Engineering Science in the Feminine, etc.) to talk to schoolgirls about their professions.
Philippe Bonnave continued: “I would like to thank the female mentors at Bouygues Construction for their engagement. Gender diversity is a vital factor in the future performance of our companies and of our sector. So we have a key role to play in advancing it.”
Our goal in 2018 is to strengthen this involvement so that it covers all the Group's businesses and territories. Elles Bougent is currently preparing a high-profile one-day event devoted to construction and to the smart city – a first for the sector – involving numerous companies. This new event in the calendar, named “Women are Building the City of Tomorrow”, is scheduled for April 5, 2018. It will consist of site visits and tours of companies, followed by large-scale gatherings of participants in six major French cities.
For more than ten years, Elles Bougent has introduced schoolgirls and female students to exciting career paths as engineers and technicians. Its aim is to encourage ambitions so that these young women consider entering sectors of industry where there is a shortage of female talents, such as construction, energy, digital technology and transport. It does this through a large number of annual events (over 300) organised by the association, at which female mentors – women who are currently working for our partners – talk with enthusiasm and passion about their careers and the diversity of their professions.

Marie-Sophie Pawlak, president and founder of the association, said: “I extend my warmest thanks to Bruno Guillemet, head of HR at the Valeo Group, who has enthusiastically supported our campaigns for the past 18 months, during which time we have seen the first international expansion of Elles Bougent. I am happy and proud that Philippe Bonnave, Chairman and CEO of Bouygues Construction, is the new Honorary President of Elles Bougent, because the construction sector is one of those with the greatest growth potential for the future generation, particularly through the ‘smart city’ concept, which covers a wide range of sectors, including transport, energy, building and digital technology. These are all sectors that we are increasingly seeking to feminise! The commitment of the female mentors at Bouygues Construction and those of all our partners will help us encourage even more vocations among girls, giving them the opportunity to discover the professions, assignments and great careers available in these exciting sectors.”


The successive Honorary Presidents of Elles Bougent since it was founded, with the positions they held at the time:

For the past ten years, the Elles Bougent association has introduced female high school students to potential career paths as engineers and technicians in a range of sectors of industry which are suffering from a lack of female talent, chiefly the automobile, aerospace, energy, rail, maritime, digital and building sectors.

Marie-Sophie Pawlak is president and founder of the association. The Honorary President for 2018 is Philippe Bonnave, Chairman and CEO of Bouygues Construction.