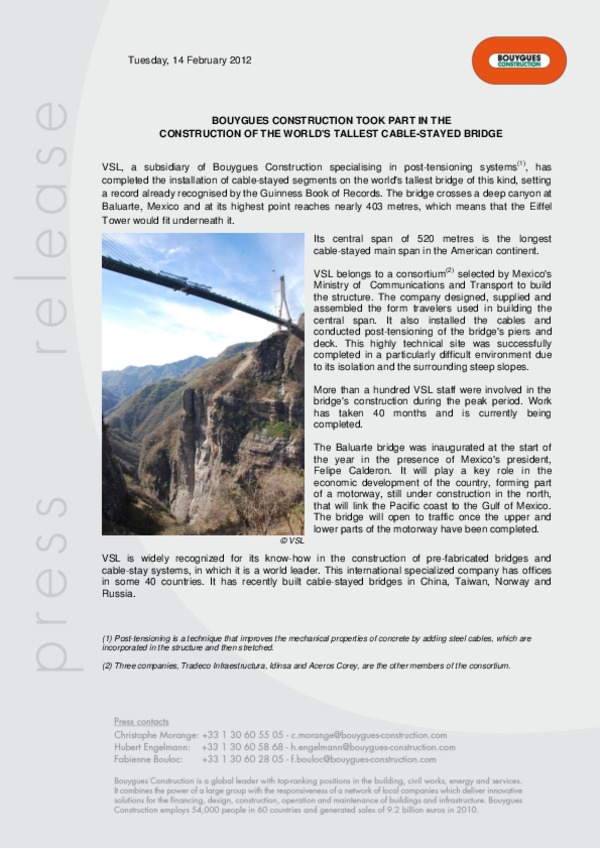 VSL, a subsidiary of Bouygues Construction specialising in post-tensioning systems(1), has completed the installation of cable-stayed segments on the world's tallest bridge of this kind, setting a record already recognised by the Guinness Book of Records. The bridge crosses a deep canyon at Baluarte, Mexico and at its highest point reaches nearly 403 metres, which means that the Eiffel Tower would fit underneath it. Its central span of 520 metres is the longest cable-stayed main span in the American continent.

VSL belongs to a consortium(2) selected by Mexico's Ministry of  Communications and Transport to build the structure. The company designed, supplied and assembled the form travelers used in building the central span. It also installed the cables and conducted post-tensioning of the bridge's piers and deck. This highly technical site was successfully completed in a particularly difficult environment due to its isolation and the surrounding steep slopes.

More than a hundred VSL staff were involved in the bridge's construction during the peak period. Work has taken 40 months and is currently being completed.

The Baluarte bridge was inaugurated at the start of the year in the presence of Mexico's president, Felipe Calderon. It will play a key role in the economic development of the country, forming part of a motorway, still under construction in the north, that will link the Pacific coast to the Gulf of Mexico. The bridge will open to traffic once the upper and lower parts of the motorway have been completed.

VSL is widely recognized for its know-how in the construction of pre-fabricated bridges and
cable-stay systems, in which it is a world leader. This international specialized company has offices in some 40 countries. It has recently built cable-stayed bridges in China, Taiwan, Norway and Russia.

(1) Post-tensioning is a technique that improves the mechanical properties of concrete by adding steel cables, which are incorporated in the structure and then stretched.

(2) Three companies, Tradeco Infraestructura, Idinsa and Aceros Corey, are the other members of the consortium.