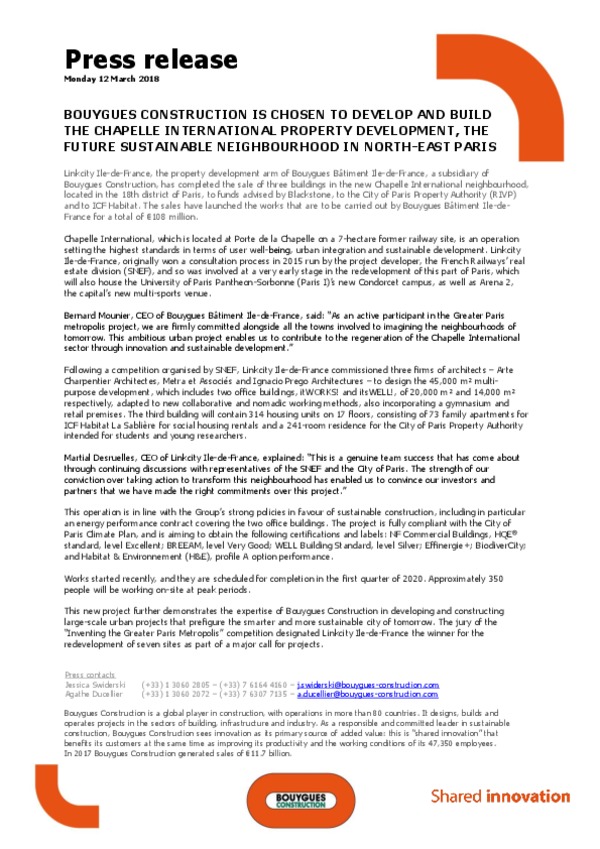 Linkcity Ile-de-France, the property development arm of Bouygues Bâtiment Ile-de-France, a subsidiary of Bouygues Construction, has completed the sale of three buildings in the new Chapelle International neighbourhood, located in the 18th district of Paris, to funds advised by Blackstone, to the City of Paris Property Authority (RIVP) and to ICF Habitat. The sales have launched the works that are to be carried out by Bouygues Bâtiment Ile-de-France for a total of €108 million.

Chapelle International, which is located at Porte de la Chapelle on a 7-hectare former railway site, is an operation setting the highest standards in terms of user well-being, urban integration and sustainable development. Linkcity Ile-de-France, originally won a consultation process in 2015 run by the project developer, the French Railways’ real estate division (SNEF), and so was involved at a very early stage in the redevelopment of this part of Paris, which will also house the University of Paris Pantheon-Sorbonne (Paris I)’s new Condorcet campus, as well as Arena 2, the capital’s new multi-sports venue.

Bernard Mounier, CEO of Bouygues Bâtiment Ile-de-France, said: “As an active participant in the Greater Paris metropolis project, we are firmly committed alongside all the towns involved to imagining the neighbourhoods of tomorrow. This ambitious urban project enables us to contribute to the regeneration of the Chapelle International sector through innovation and sustainable development.”

Martial Desruelles, CEO of Linkcity Ile-de-France, explained: “This is a genuine team success that has come about through continuing discussions with representatives of the SNEF and the City of Paris. The strength of our conviction over taking action to transform this neighbourhood has enabled us to convince our investors and partners that we have made the right commitments over this project.”

This operation is in line with the Group’s strong policies in favour of sustainable construction, including in particular an energy performance contract covering the two office buildings. The project is fully compliant with the City of Paris Climate Plan, and is aiming to obtain the following certifications and labels: NF Commercial Buildings, HQE® standard, level Excellent; BREEAM, level Very Good; WELL Building Standard, level Silver; Effinergie+; BiodiverCity; and Habitat & Environnement (H&E), profile A option performance.

Works started recently, and they are scheduled for completion in the first quarter of 2020. Approximately 350 people will be working on-site at peak periods.

This new project further demonstrates the expertise of Bouygues Construction in developing and constructing large-scale urban projects that prefigure the smarter and more sustainable city of tomorrow. The jury of the “Inventing the Greater Paris Metropolis” competition designated Linkcity Ile-de-France the winner for the redevelopment of seven sites as part of a major call for projects.