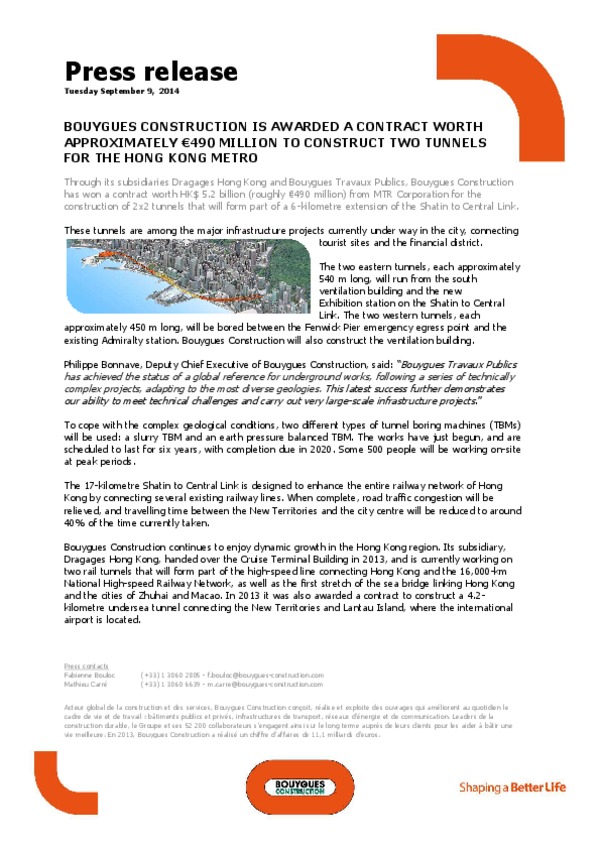 Through its subsidiaries Dragages Hong Kong and Bouygues Travaux Publics, Bouygues Construction has won a contract worth HK$ 5.2 billion (roughly €490 million) from MTR Corporation for the construction of 2x2 tunnels that will form part of a 6-kilometre extension of the Shatin to Central Link.

These tunnels are among the major infrastructure projects currently under way in the city, connecting tourist sites and the financial district.

The two eastern tunnels, each approximately 540 m long, will run from the south ventilation building and the new Exhibition station on the Shatin to Central Link. The two western tunnels, each approximately 450 m long, will be bored between the Fenwick Pier emergency egress point and the existing Admiralty station. Bouygues Construction will also construct the ventilation building.

To cope with the complex geological conditions, two different types of tunnel boring machines (TBMs) will be used: a slurry TBM and an earth pressure balanced TBM. The works have just begun, and are scheduled to last for six years, with completion due in 2020. Some 500 people will be working on-site at peak periods.

The 17-kilometre Shatin to Central Link is designed to enhance the entire railway network of Hong Kong by connecting several existing railway lines. When complete, road traffic congestion will be relieved, and travelling time between the New Territories and the city centre will be reduced to around 40% of the time currently taken.

Bouygues Construction continues to enjoy dynamic growth in the Hong Kong region. Its subsidiary, Dragages Hong Kong, handed over the Cruise Terminal Building in 2013, and is currently working on two rail tunnels that will form part of the high-speed line connecting Hong Kong and the 16,000-km National High-speed Railway Network, as well as the first stretch of the sea bridge linking Hong Kong and the cities of Zhuhai and Macao. In 2013 it was also awarded a contract to construct a 4.2-kilometre undersea tunnel connecting the New Territories and Lantau Island, where the international airport is located.