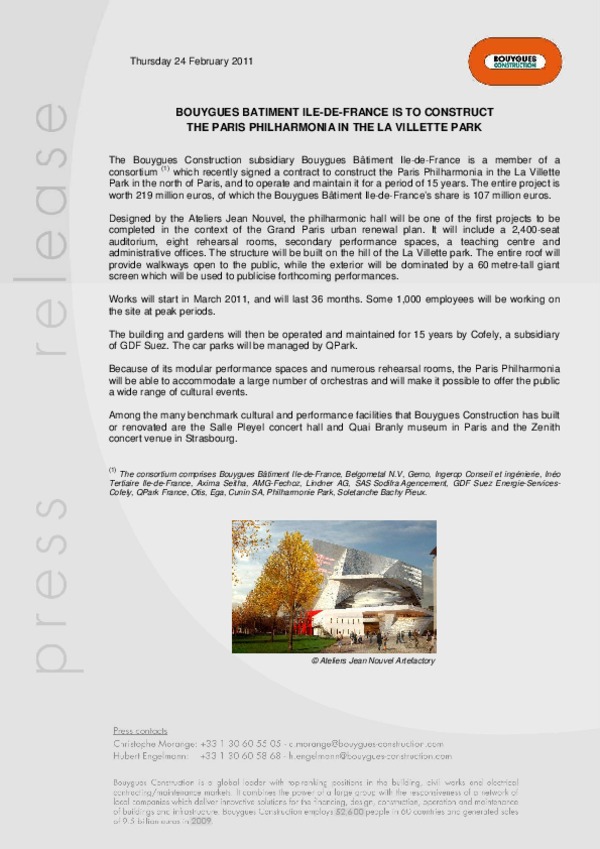 The Bouygues Construction subsidiary Bouygues Bâtiment Ile-de-France is a member of a consortium (1) which recently signed a contract to construct the Paris Philharmonia in the La Villette Park in the north of Paris, and to operate and maintain it for a period of 15 years. The entire project is worth 219 million euros, of which the Bouygues Bâtiment Ile-de-France’s share is 107 million euros.

Designed by the Ateliers Jean Nouvel, the philharmonic hall will be one of the first projects to be completed in the context of the Grand Paris urban renewal plan. It will include a 2,400-seat auditorium, eight rehearsal rooms, secondary performance spaces, a teaching centre and administrative offices. The structure will be built on the hill of the La Villette park. The entire roof will provide walkways open to the public, while the exterior will be dominated by a 60 metre-tall giant screen which will be used to publicise forthcoming performances.

Works will start in March 2011, and will last 36 months. Some 1,000 employees will be working on the site at peak periods.

The building and gardens will then be operated and maintained for 15 years by Cofely, a subsidiary of GDF Suez. The car parks will be managed by QPark.

Because of its modular performance spaces and numerous rehearsal rooms, the Paris Philharmonia will be able to accommodate a large number of orchestras and will make it possible to offer the public a wide range of cultural events.

Among the many benchmark cultural and performance facilities that Bouygues Construction has built or renovated are the Salle Pleyel concert hall and Quai Branly museum in Paris and the Zenith concert venue in Strasbourg.