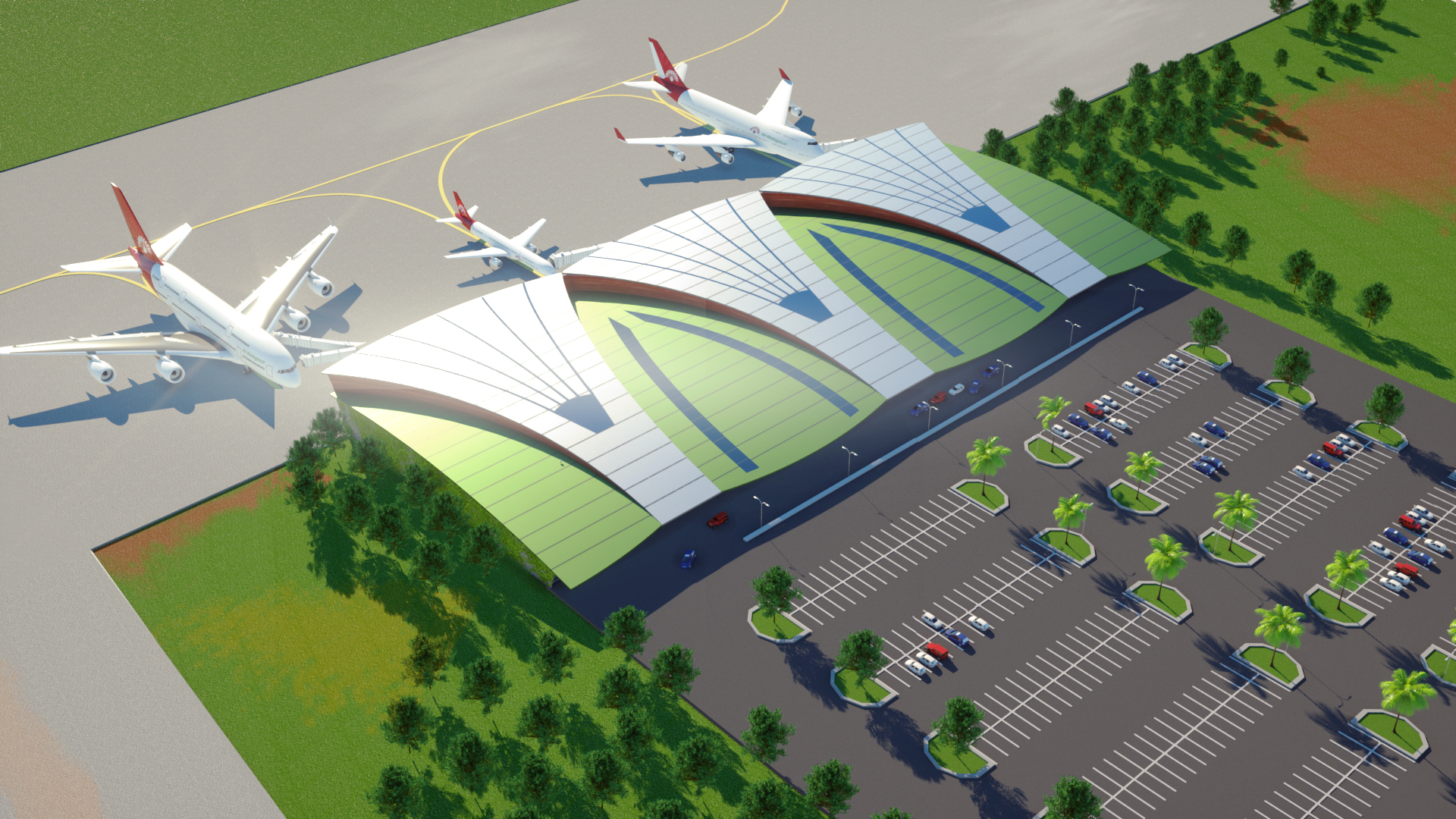 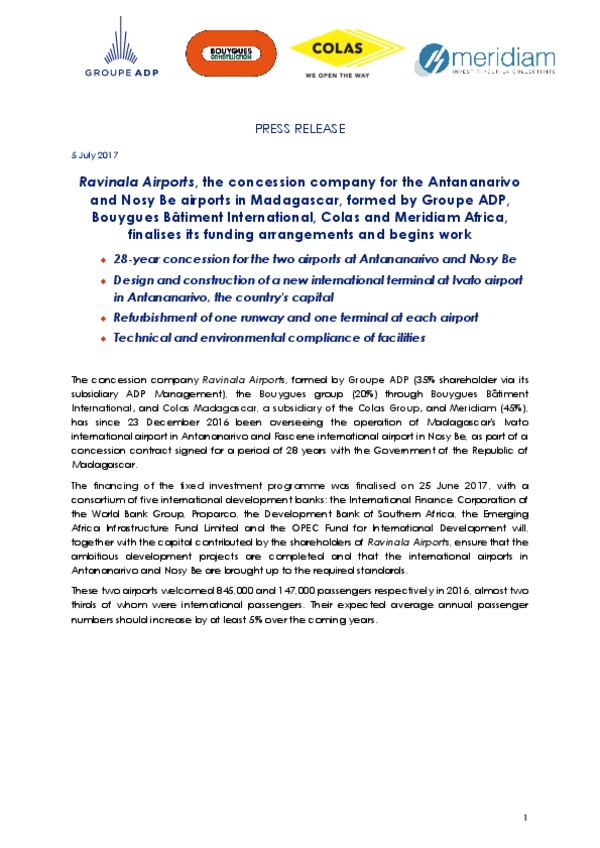 The concession company Ravinala Airports, formed by Groupe ADP (35% shareholder via its subsidiary ADP Management), the Bouygues group (20%) through Bouygues Bâtiment International, and Colas Madagascar, a subsidiary of the Colas Group, and Meridiam (45%), has since 23 December 2016 been overseeing the operation of Madagascar's Ivato international airport in Antananarivo and Fascene international airport in Nosy Be, as part of a concession contract signed for a period of 28 years with the Government of the Republic of Madagascar.

The financing of the fixed investment programme was finalised on 25 June 2017, with a consortium of five international development banks: the International Finance Corporation of the World Bank Group, Proparco, the Development Bank of Southern Africa, the Emerging Africa Infrastructure Fund Limited and the OPEC Fund for International Development will, together with the capital contributed by the shareholders of Ravinala Airports, ensure that the ambitious development projects are completed and that the international airports in Antananarivo and Nosy Be are brought up to the required standards.
These two airports welcomed 845,000 and 147,000 passengers respectively in 2016, almost two thirds of whom were international passengers. Their expected average annual passenger numbers should increase by at least 5% over the coming years.
Under the concession contract, Ravinala Airports, the concession company, is overseeing the design, construction and operation of the following during phase one:

At Ivato Airport in Antananarivo:
At Fascene Airport in Nosy Be:
The construction work at both airports will be carried out by both Bouygues Bâtiment International, a company with vast experience in the design and construction of new airport terminals, and Colas Madagascar, based in Madagascar for the past 60 years, which will contribute the renowned expertise of the Colas Group in airfield roadways.  The two companies have joined forces in a 50/50 “Design Construction” joint venture.
As for Groupe ADP, it will provide assistance in the operation and maintenance of both airports throughout the term of the concession. Furthermore, ADP Ingénierie has been working on the design of the new Ivato Airport terminal.
About Groupe ADP - www.groupeadp.fr
Groupe ADP builds, develops and manages airports, including Paris-Charles de Gaulle, Paris-Orly and Paris-Le Bourget. In 2016, Paris Aéroport handled more than 97 million passengers and 2.2 million metric tonnes of freight and mail at Paris-Charles de Gaulle and Paris-Orly, and more than 42 million passengers in airports abroad through its subsidiary Aéroport de Paris Management. Boasting an exceptional geographic location and a major catchment area, the Group is pursuing its strategy of adapting and modernising its terminal facilities and upgrading quality of services; the group also intends to develop its retail and real estate businesses. In 2016, Group revenue stood at €2,947 million and net income at €435 million. Registered office: 1, rue de France, 93 290 Tremblay-en-France. Aéroports de Paris is a public limited company (Société Anonyme) with share capital of €296,881,806. Registered in the Bobigny Trade and Company Register under no. 552 016 628.
About Bouygues Construction - www.bouygues.constuction.com
Bouygues Construction is a global player in construction, with operations in more than 80 countries. It designs, builds and operates projects in the sectors of building, infrastructure and industry. As a responsible and committed leader in sustainable construction, Bouygues Construction sees innovation as its primary source of added value; this is “shared innovation” that benefits its customers at the same time as improving its productivity and the working conditions of its 50,100 employees. In 2016, Bouygues Construction generated sales of €11.8 billion.
With this new benchmark, its subsidiary Bouygues Bâtiment International has established itself as a major player in airport concessions. With the ability to operate across the entire value chain of these projects, the company is a current shareholder in Paphos and Larnaka airports (Cyprus), Iqaluit airport (Canada) and Zagreb airport (Croatia), for which it has also overseen the design and construction of new terminals.
About Colas - www.colas.com
Colas, a subsidiary of the Bouygues Group, is a world leader in the construction and maintenance of transport infrastructure, aiming to meet the challenges of mobility, urban development and environmental protection. With 55,000 employees in more than 50 countries on five continents, the Group performs some 90,000 projects each year via 800 construction business units and 2,000 material production units. In 2016, consolidated revenue at Colas totaled 11.0 billion euros (48% outside of France). Net profit attributable to the Group amounted to 355 million euros.
About Meridiam - www.meridiam.com
Meridiam was founded in 2005 by Thierry Déau, with the belief that alignment of interests between the public and private sector is possible and can help answer the social needs of the communities. Meridiam is an independent investment firm specialized in the development, financing, and management of long-term and sustainable public infrastructure projects. With offices in Paris, New York, Toronto, Luxembourg, Istanbul and Dakar, Meridiam currently manages $5 billion of assets, and has to date 56 projects under development, construction, or in operation.