Télécharger le PDF
At the end of February, teams from Bouygues Bâtiment Ile-de-France, a subsidiary of Bouygues Construction, and Icade, both members of the Chrysalis consortium(1), concluded the refurbishment of the Paris Zoological Park. After two and a half years of works, the 26th and final zone has now been handed over, consisting of the sea lion and penguin pool and the rhino, addax and zebra enclosure.

Philippe Fabié, Deputy Chief Executive Officer of Bouygues Construction, said: “As an investor in this project with responsibility for construction and maintenance, Bouygues Construction is delighted about its long-term partnership with the National Natural History Museum, which has allowed it to support such an iconic installation, which is both highly popular with Parisians and internationally renowned. On a wider level, we are pleased to have taken part in raising the public’s awareness of issues of biodiversity through the new zoological park.”

Serge Grzybowski, Chairman and CEO of Icade, said: “This is an iconic operation, an architectural challenge in which Icade is very proud to have taken part for the Natural History Museum. This ambitious and complex project is a good illustration of our culture as a public developer and our DNA as an investor in operations of general interest, alongside the Caisse des Dépôts.” 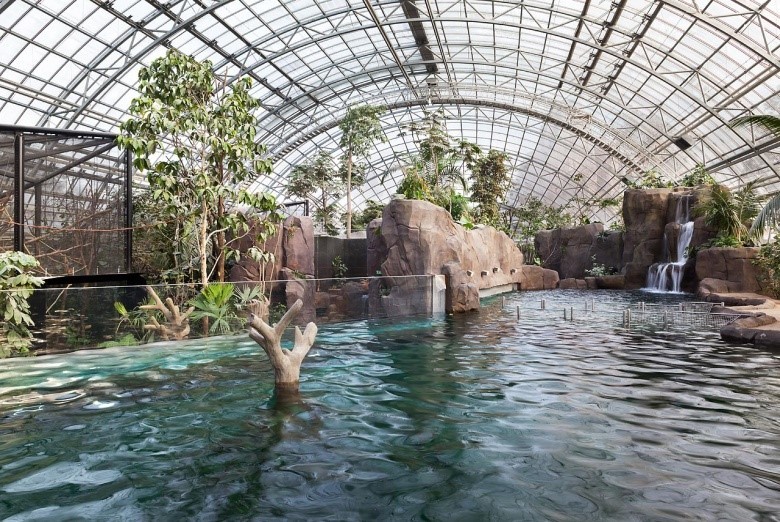 The renovation of the Paris Zoological Park was undertaken under a public-private partnership (PPP) signed in February 2010 between the National Natural History Museum and the Chrysalis consortium. Chrysalis is responsible for the architectural design and landscaping, financing, project management and performing the works, as well as upkeep and maintenance of the zoo.
This flagship project was carried out by Bouygues Bâtiment Ile-de-France, Bouygues Construction’s subsidiary in the Paris region, and involved more than 300 technicians, craftsmen and site workers.

Bouygues Energies & Services will be responsible for maintaining and cleaning the zoo for a period of 25 years. In all, approximately ten of the company’s employees will be dedicated to ensuring the day-to-day technical functioning of the zoo, in coordination with vets and keepers.
Although no specific HQE® framework exists for zoological structures, Chrysalis has drawn inspiration from High Environmental Quality procedures in order to ensure compliance with high standards of environmental performance. The management of water, waste and energy needs has been carefully designed according to the principles of sustainable development. Chrysalis has also undertaken energy performance commitments for the entire duration of the PPP.

The first ever total refurbishment of a zoo in history, the project brings the site into the 21st century. In the new zoo, which opens on 12 April, the visitor will have the impression of moving among the animals, which will be divided into five vast biozones which contain 16 ecosystems.