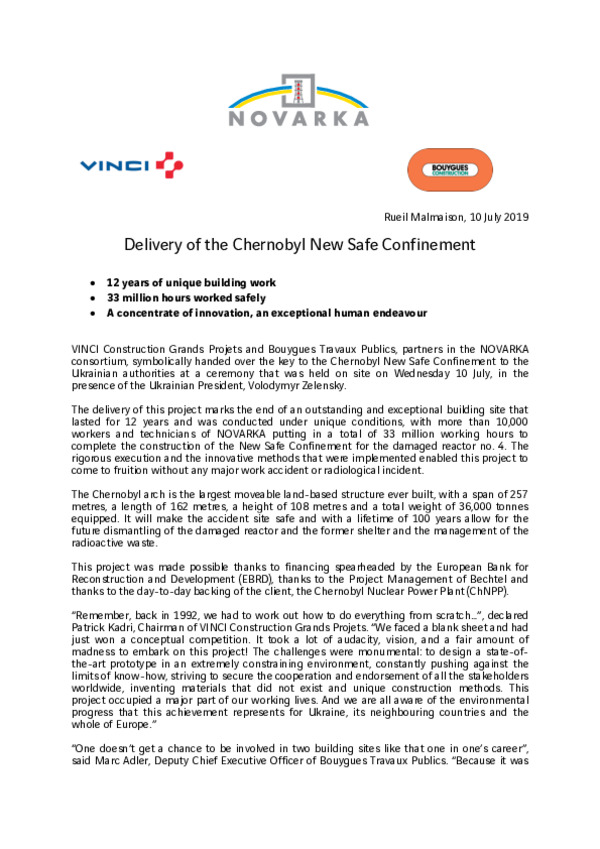 VINCI Construction Grands Projets and Bouygues Travaux Publics, partners in the NOVARKA consortium, symbolically handed over the key to the Chernobyl New Safe Confinement to the Ukrainian authorities at a ceremony that was held on site on Wednesday 10 July, in the presence of the Ukrainian President, Volodymyr Zelensky.

The delivery of this project marks the end of an outstanding and exceptional building site that lasted for 12 years and was conducted under unique conditions, with more than 10,000 workers and technicians of NOVARKA putting in a total of 33 million working hours to complete the construction of the New Safe Confinement for the damaged reactor no. 4. The rigorous execution and the innovative methods that were implemented enabled this project to come to fruition without any major work accident or radiological incident.

The Chernobyl arch is the largest moveable land-based structure ever built, with a span of 257 metres, a length of 162 metres, a height of 108 metres and a total weight of 36,000 tonnes equipped. It will make the accident site safe and with a lifetime of 100 years allow for the future dismantling of the damaged reactor and the former shelter and the management of the radioactive waste.

This project was made possible thanks to financing spearheaded by the European Bank for Reconstruction and Development (EBRD), thanks to the Project Management of Bechtel and thanks to the day-to-day backing of the client, the Chernobyl Nuclear Power Plant (ChNPP).

“Remember, back in 1992, we had to work out how to do everything from scratch…”, declared Patrick Kadri, Chairman of VINCI Construction Grands Projets. “We faced a blank sheet and had just won a conceptual competition. It took a lot of audacity, vision, and a fair amount of madness to embark on this project! The challenges were monumental: to design a state-of-the-art prototype in an extremely constraining environment, constantly pushing against the limits of know-how, striving to secure the cooperation and endorsement of all the stakeholders worldwide, inventing materials that did not exist and unique construction methods. This project occupied a major part of our working lives. And we are all aware of the environmental progress that this achievement represents for Ukraine, its neighbouring countries and the whole of Europe.”

“One doesn’t get a chance to be involved in two building sites like that one in one’s career”, said Marc Adler, Deputy Chief Executive Officer of Bouygues Travaux Publics. “Because it was huge, because it was complicated, because Europe and the whole world had bet a lot on our success. Each of our trades really went into overdrive and surpassed themselves: the engineers, the radiation protection people, the employees in charge of executing the work, the project managers…not to mention the people in charge of human resources, who recruited staff in more than 30 countries. Chernobyl will be known in the history of civil engineering as a concentrate of innovation, and the engineers who took part in this project are already transmitting the teachings of this outstanding endeavour in engineering schools.”

The acceptance of the project by the ChNPP heralds a new era in the history of Chernobyl, that of the dismantling of the damaged facilities, made possible by the demolition equipment integrated within the arch and controlled remotely. A life size trial was conducted successfully on 25 April 2019.