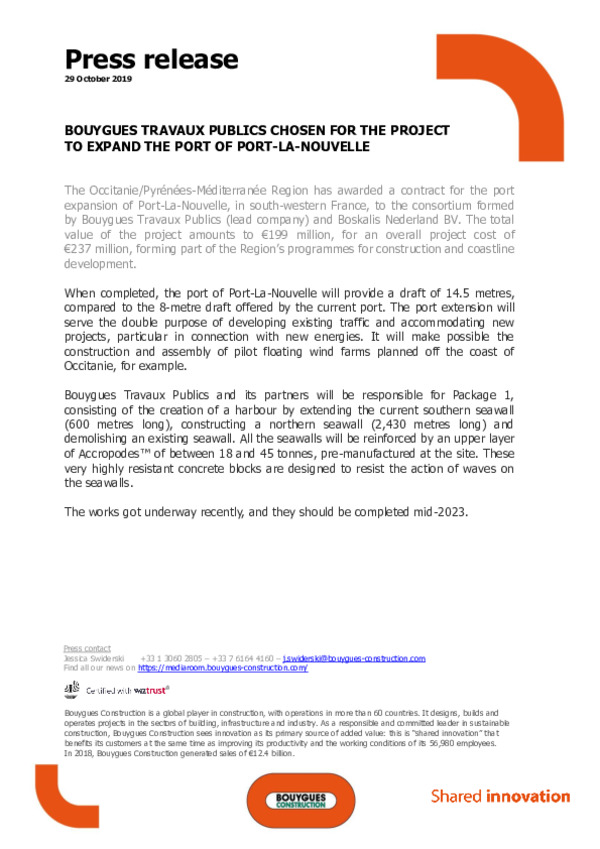 The Occitanie/Pyrénées-Méditerranée Region has awarded a contract for the port expansion of Port-La-Nouvelle, in south-western France, to the consortium formed by Bouygues Travaux Publics (lead company) and Boskalis Nederland BV. The total value of the project amounts to €199 million, for an overall project cost of €237 million, forming part of the Region’s programmes for construction and coastline development.

When completed, the port of Port-La-Nouvelle will provide a draft of 14.5 metres, compared to the 8-metre draft offered by the current port. The port extension will serve the double purpose of developing existing traffic and accommodating new projects, particular in connection with new energies. It will make possible the construction and assembly of pilot floating wind farms planned off the coast of Occitanie, for example.

Bouygues Travaux Publics and its partners will be responsible for Package 1, consisting of the creation of a harbour by extending the current southern seawall (600 metres long), constructing a northern seawall (2,430 metres long) and demolishing an existing seawall. All the seawalls will be reinforced by an upper layer of Accropodes™ of between 18 and 45 tonnes, pre-manufactured at the site. These very highly resistant concrete blocks are designed to resist the action of waves on the seawalls.

The works got underway recently, and they should be completed mid-2023.