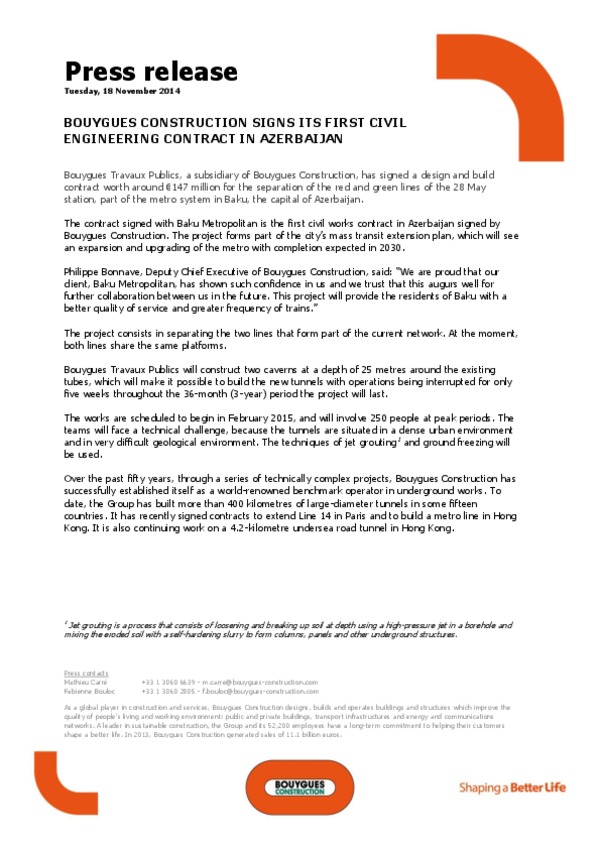 Bouygues Travaux Publics, a subsidiary of Bouygues Construction, has signed a design and build contract worth around €147 million for the separation of the red and green lines of the 28 May station, part of the metro system in Baku, the capital of Azerbaijan.

The contract signed with Baku Metropolitan is the first civil works contract in Azerbaijan signed by Bouygues Construction. The project forms part of the city’s mass transit extension plan, which will see an expansion and upgrading of the metro with completion expected in 2030.

Philippe Bonnave, Deputy Chief Executive of Bouygues Construction, said: “We are proud that our client, Baku Metropolitan, has shown such confidence in us and we trust that this augurs well for further collaboration between us in the future. This project will provide the residents of Baku with a better quality of service and greater frequency of trains.”

The project consists in separating the two lines that form part of the current network. At the moment, both lines share the same platforms.

Bouygues Travaux Publics will construct two caverns at a depth of 25 metres around the existing tubes, which will make it possible to build the new tunnels with operations being interrupted for only five weeks throughout the 36-month (3-year) period the project will last.

The works are scheduled to begin in February 2015, and will involve 250 people at peak periods. The teams will face a technical challenge, because the tunnels are situated in a dense urban environment and in very difficult geological environment. The techniques of jet grouting1 and ground freezing will be used.

Over the past fifty years, through a series of technically complex projects, Bouygues Construction has successfully established itself as a world-renowned benchmark operator in underground works. To date, the Group has built more than 400 kilometres of large-diameter tunnels in some fifteen countries. It has recently signed contracts to extend Line 14 in Paris and to build a metro line in Hong Kong. It is also continuing work on a 4.2-kilometre undersea road tunnel in Hong Kong.

1 Jet grouting is a process that consists of loosening and breaking up soil at depth using a high-pressure jet in a borehole and mixing the eroded soil with a self-hardening slurry to form columns, panels and other underground structures.
​