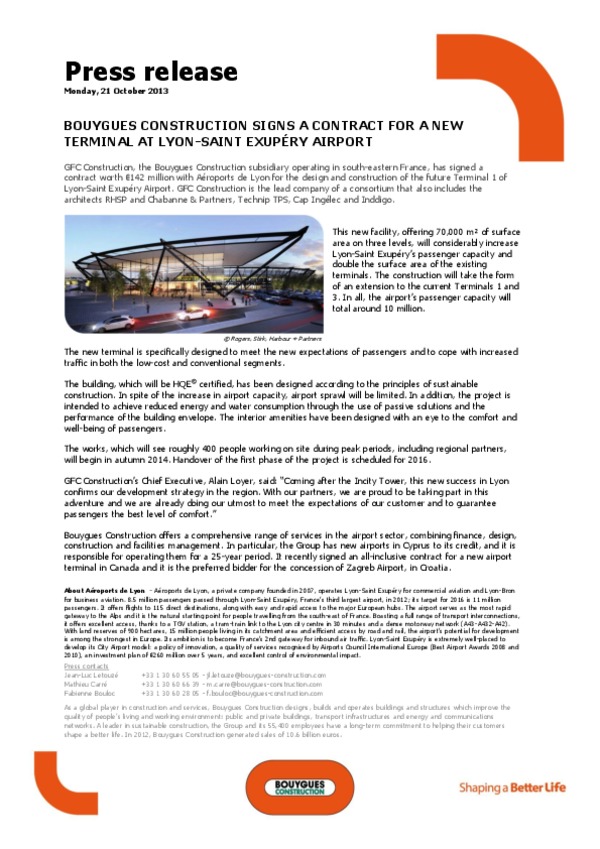 GFC Construction, the Bouygues Construction subsidiary operating in south-eastern France, has signed a contract worth €142 million with Aéroports de Lyon for the design and construction of the future Terminal 1 of Lyon-Saint Exupéry Airport. GFC Construction is the lead company of a consortium that also includes the architects RHSP and Chabanne & Partners, Technip TPS, Cap Ingélec and Inddigo.

This new facility, offering 70,000 m² of surface area on three levels, will considerably increase Lyon-Saint Exupéry’s passenger capacity and double the surface area of the existing terminals. The construction will take the form of an extension to the current Terminals 1 and 3. In all, the airport’s passenger capacity will total around 10 million.
© Rogers, Stirk, Harbour + Partners

The new terminal is specifically designed to meet the new expectations of passengers and to cope with increased
traffic in both the low-cost and conventional segments.
The building, which will be HQE© certified, has been designed according to the principles of sustainable
construction. In spite of the increase in airport capacity, airport sprawl will be limited. In addition, the project is
intended to achieve reduced energy and water consumption through the use of passive solutions and
the performance of the building envelope. The interior amenities have been designed with an eye to the comfort and well-being of passengers

The works, which will see roughly 400 people working on site during peak periods, including regional partners,
will begin in autumn 2014. Handover of the first phase of the project is scheduled for 2016.

GFC Construction’s Chief Executive, Alain Loyer, said: “Coming after the Incity Tower, this new success in Lyon
confirms our development strategy in the region. With our partners, we are proud to be taking part in this
adventure and we are already doing our utmost to meet the expectations of our customer and to guarantee passengers the best level of comfort.”

Bouygues Construction offers a comprehensive range of services in the airport sector, combining finance, design,
construction and facilities management. In particular, the Group has new airports in Cyprus to its credit, and it is
responsible for operating them for a 25-year period. It recently signed an all-inclusive contract for a new airport
terminal in Canada and it is the preferred bidder for the concession of Zagreb Airport, in Croatia.

About Aéroports de Lyon - Aéroports de Lyon, a private company founded in 2007, operates Lyon-Saint Exupéry for commercial aviation and Lyon-Bron for business aviation. 8.5 million passengers passed through Lyon-Saint Exupéry, France’s third largest airport, in 2012; its target for 2016 is 11 million passengers. It offers flights to 115 direct destinations, along with easy and rapid access to the major European hubs. The airport serves as the most rapid gateway to the Alps and it is the natural starting point for people travelling from the south-east of France. Boasting a full range of transport interconnections, it offers excellent access, thanks to a TGV station, a tram-train link to the Lyon city centre in 30 minutes and a dense motorway network (A43-A432-A42). With land reserves of 900 hectares, 15 million people living in its catchment area and efficient access by road and rail, the airport’s potential for development is among the strongest in Europe. Its ambition is to become France’s 2nd gateway for inbound air traffic. Lyon-Saint Exupéry is extremely well-placed to develop its City Airport model: a policy of innovation, a quality of services recognised by Airports Council International Europe (Best Airport Awards 2008 and 2010), an investment plan of €260 million over 5 years, and excellent control of environmental impact.