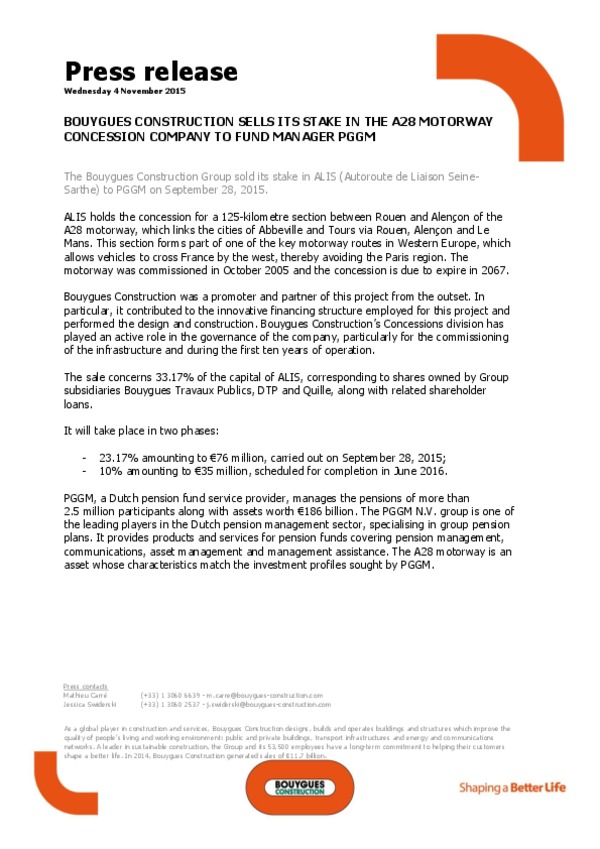 ALIS holds the concession for a 125-kilometre section between Rouen and Alençon of the A28 motorway, which links the cities of Abbeville and Tours via Rouen, Alençon and Le Mans. This section forms part of one of the key motorway routes in Western Europe, which allows vehicles to cross France by the west, thereby avoiding the Paris region. The motorway was commissioned in October 2005 and the concession is due to expire in 2067.

Bouygues Construction was a promoter and partner of this project from the outset. In particular, it contributed to the innovative financing structure employed for this project and performed the design and construction. Bouygues Construction’s Concessions division has played an active role in the governance of the company, particularly for the commissioning of the infrastructure and during the first ten years of operation.

The sale concerns 33.17% of the capital of ALIS, corresponding to shares owned by Group subsidiaries Bouygues Travaux Publics, DTP and Quille, along with related shareholder loans.

It will take place in two phases:

PGGM, a Dutch pension fund service provider, manages the pensions of more than 2.5 million participants along with assets worth €186 billion. The PGGM N.V. group is one of the leading players in the Dutch pension management sector, specialising in group pension plans. It provides products and services for pension funds covering pension management, communications, asset management and management assistance. The A28 motorway is an asset whose characteristics match the investment profiles sought by PGGM.