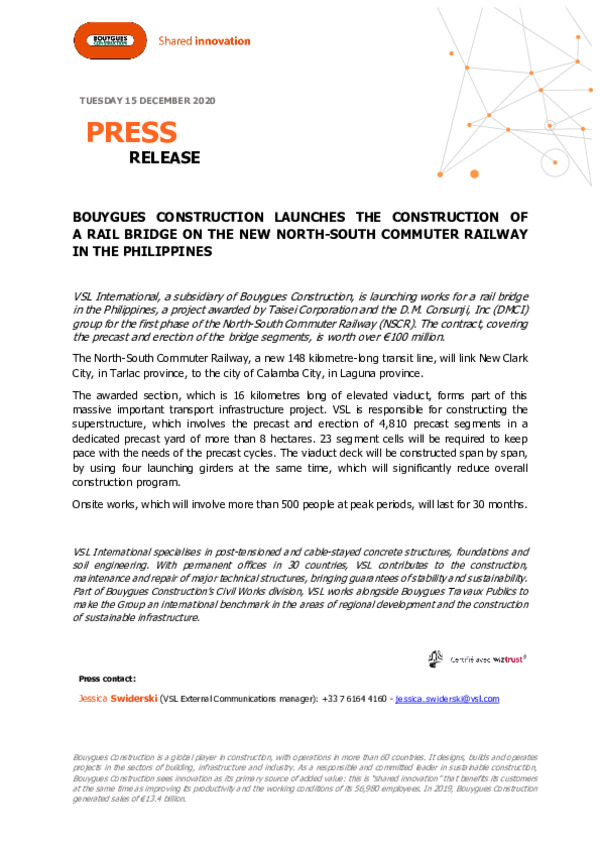 VSL International, a subsidiary of Bouygues Construction, is launching works for a rail bridge in the Philippines, a project awarded by Taisei Corporation and the D.M. Consunji, Inc (DMCI) group for the first phase of the North-South Commuter Railway (NSCR). The contract, covering the precast and erection of the bridge segments, is worth over €100 million.

The North-South Commuter Railway, a new 148 kilometre-long transit line, will link New Clark City, in Tarlac province, to the city of Calamba City, in Laguna province.

The awarded section, which is 16 kilometres long of elevated viaduct, forms part of this massive important transport infrastructure project. VSL is responsible for constructing the superstructure, which involves the precast and erection of 4,810 precast segments in a dedicated precast yard of more than 8 hectares. 23 segment cells will be required to keep pace with the needs of the precast cycles. The viaduct deck will be constructed span by span, by using four launching girders at the same time, which will significantly reduce overall construction program.

Onsite works, which will involve more than 500 people at peak periods, will last for 30 months.

VSL International specialises in post-tensioned and cable-stayed concrete structures, foundations and soil engineering. With permanent offices in 30 countries, VSL contributes to the construction, maintenance and repair of major technical structures, bringing guarantees of stability and sustainability. Part of Bouygues Construction’s Civil Works division, VSL works alongside Bouygues Travaux Publics to make the Group an international benchmark in the areas of regional development and the construction of sustainable infrastructure.