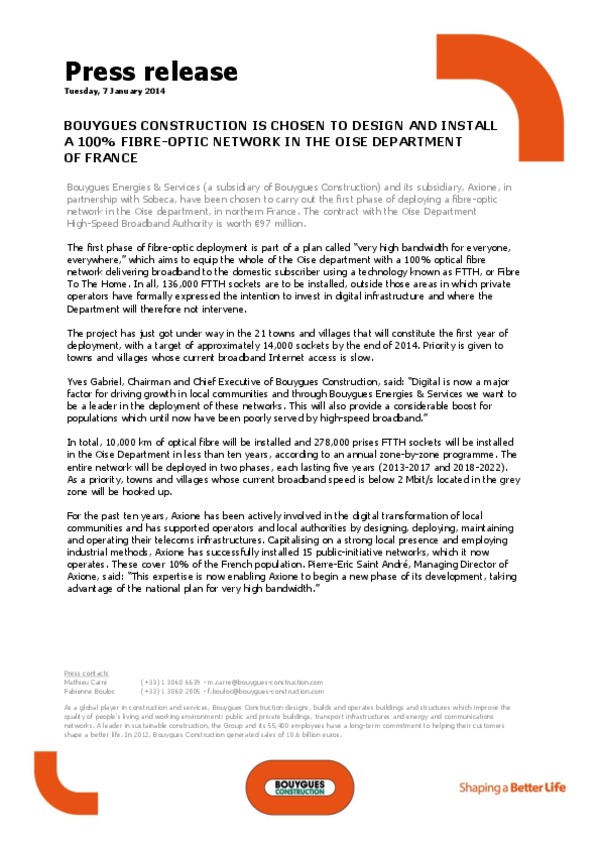 Bouygues Energies & Services (a subsidiary of Bouygues Construction) and its subsidiary, Axione, in partnership with Sobeca, have been chosen to carry out the first phase of deploying a fibre-optic network in the Oise department, in northern France. The contract with the Oise Department
High-Speed Broadband Authority is worth €97 million.

The first phase of fibre-optic deployment is part of a plan called “very high bandwidth for everyone, everywhere,” which aims to equip the whole of the Oise department with a 100% optical fibre network delivering broadband to the domestic subscriber using a technology known as FTTH, or Fibre To The Home. In all, 136,000 FTTH sockets are to be installed, outside those areas in which private operators have formally expressed the intention to invest in digital infrastructure and where the Department will therefore not intervene.

The project has just got under way in the 21 towns and villages that will constitute the first year of deployment, with a target of approximately 14,000 sockets by the end of 2014. Priority is given to towns and villages whose current broadband Internet access is slow.

Yves Gabriel, Chairman and Chief Executive of Bouygues Construction, said: “Digital is now a major factor for driving growth in local communities and through Bouygues Energies & Services we want to be a leader in the deployment of these networks. This will also provide a considerable boost for populations which until now have been poorly served by high-speed broadband.”

In total, 10,000 km of optical fibre will be installed and 278,000 prises FTTH sockets will be installed in the Oise Department in less than ten years, according to an annual zone-by-zone programme. The entire network will be deployed in two phases, each lasting five years (2013-2017 and 2018-2022). As a priority, towns and villages whose current broadband speed is below 2 Mbit/s located in the grey zone will be hooked up.

For the past ten years, Axione has been actively involved in the digital transformation of local communities and has supported operators and local authorities by designing, deploying, maintaining and operating their telecoms infrastructures. Capitalising on a strong local presence and employing industrial methods, Axione has successfully installed 15 public-initiative networks, which it now operates. These cover 10% of the French population. Pierre-Eric Saint André, Managing Director of Axione, said: “This expertise is now enabling Axione to begin a new phase of its development, taking advantage of the national plan for very high bandwidth.”