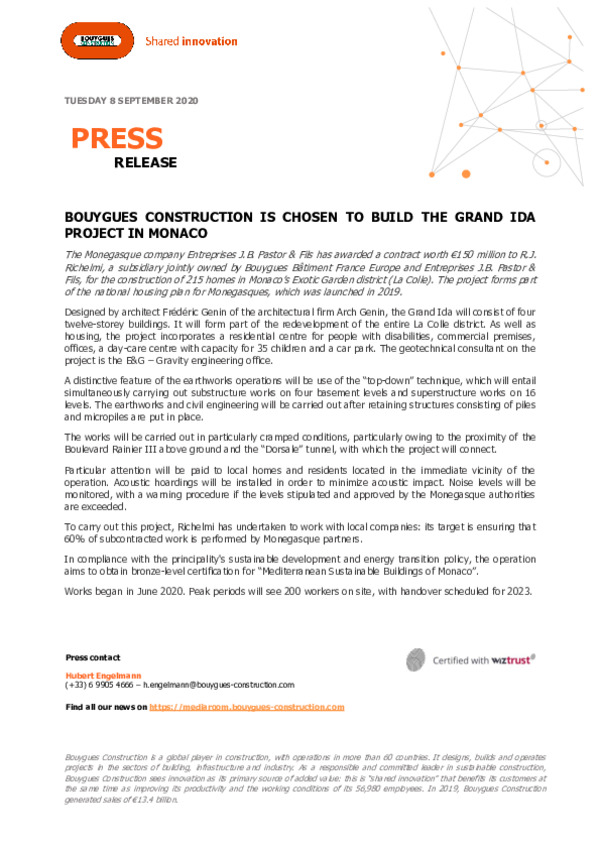 The Monegasque company Entreprises J.B. Pastor & Fils has awarded a contract worth €150 million to R.J. Richelmi, a subsidiary jointly owned by Bouygues Bâtiment France Europe and Entreprises J.B. Pastor & Fils, for the construction of 215 homes in Monaco’s Exotic Garden district (La Colle). The project forms part of the national housing plan for Monegasques, which was launched in 2019.

Designed by architect Frédéric Genin of the architectural firm Arch Genin, the Grand Ida will consist of four twelve-storey buildings. It will form part of the redevelopment of the entire La Colle district. As well as housing, the project incorporates a residential centre for people with disabilities, commercial premises, offices, a day-care centre with capacity for 35 children and a car park. The geotechnical consultant on the project is the E&G – Gravity engineering office.

A distinctive feature of the earthworks operations will be use of the “top-down” technique, which will entail simultaneously carrying out substructure works on four basement levels and superstructure works on 16 levels. The earthworks and civil engineering will be carried out after retaining structures consisting of piles and micropiles are put in place.

The works will be carried out in particularly cramped conditions, particularly owing to the proximity of the Boulevard Rainier III above ground and the “Dorsale” tunnel, with which the project will connect.

Particular attention will be paid to local homes and residents located in the immediate vicinity of the operation. Acoustic hoardings will be installed in order to minimize acoustic impact. Noise levels will be monitored, with a warning procedure if the levels stipulated and approved by the Monegasque authorities are exceeded.

To carry out this project, Richelmi has undertaken to work with local companies: its target is ensuring that 60% of subcontracted work is performed by Monegasque partners.

In compliance with the principality's sustainable development and energy transition policy, the operation aims to obtain bronze-level certification for “Mediterranean Sustainable Buildings of Monaco”.