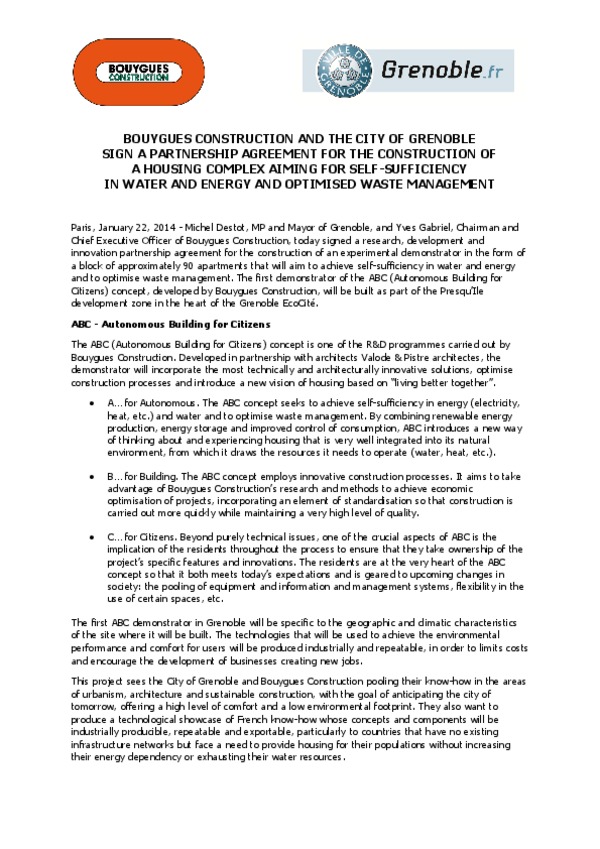 Paris, January 22, 2014 - Michel Destot, MP and Mayor of Grenoble, and Yves Gabriel, Chairman and Chief Executive Officer of Bouygues Construction, today signed a research, development and innovation partnership agreement for the construction of an experimental demonstrator in the form of a block of approximately 90 apartments that will aim to achieve self-sufficiency in water and energy and to optimise waste management. The first demonstrator of the ABC (Autonomous Building for Citizens) concept, developed by Bouygues Construction, will be built as part of the Presqu’Ile development zone in the heart of the Grenoble EcoCité.

ABC - Autonomous Building for Citizens
The ABC (Autonomous Building for Citizens) concept is one of the R&D programmes carried out by Bouygues Construction. Developed in partnership with architects Valode & Pistre architectes, the demonstrator will incorporate the most technically and architecturally innovative solutions, optimise construction processes and introduce a new vision of housing based on “living better together”.
The first ABC demonstrator in Grenoble will be specific to the geographic and climatic characteristics of the site where it will be built. The technologies that will be used to achieve the environmental performance and comfort for users will be produced industrially and repeatable, in order to limits costs and encourage the development of businesses creating new jobs.
This project sees the City of Grenoble and Bouygues Construction pooling their know-how in the areas of urbanism, architecture and sustainable construction, with the goal of anticipating the city of tomorrow, offering a high level of comfort and a low environmental footprint. They also want to produce a technological showcase of French know-how whose concepts and components will be industrially producible, repeatable and exportable, particularly to countries that have no existing infrastructure networks but face a need to provide housing for their populations without increasing their energy dependency or exhausting their water resources.

Yves Gabriel, Chairman and Chief Executive of Bouygues Construction, said: “We are delighted to enter this partnership with the City of Grenoble, important step in the development of the ABC concept: Autonomous Building for Citizens. ABC sets out to combine the environmental, technical, economic and social aspects of the buildings of tomorrow in a single approach.”
​
Michel Destot, MP and Mayor of Grenoble, said: “In welcoming the first ABC demonstrator, Grenoble is pleased to help find a new way of imagining the city of the future, the post-carbon city, in the heart of the Presqu’Ile EcoCité, which is acknowledged today as one of the biggest urban, scientific, academic and economic projects in Europe, with an investment over 15 years of approximately €1.3 billion.”

A youthful, innovative city, with thriving universities and sports activities, Grenoble is situated close to the peaks of the Vercors, Chartreuse and Belledonne ranges. Over the past two decades, Grenoble has cultivated its own distinctive, original lifestyle. It is a city with constant movement, with a dynamic force linked to an influx of new inhabitants that is its trademark. Mobile and interconnected, Grenoble is a fully-fledged European metropolis of the 21st century, at the heart of a conurbation of around 700,000 people. It was ranked the world’s fifth most inventive city by Forbes in 2013.

As a global player in construction and services, Bouygues Construction designs, builds and operates buildings and structures which improve the quality of people’s living and working environment: public and private buildings, transport infrastructures and energy and communications networks. A leader in sustainable construction, the Group and its 55,400 employees have a long-term commitment to helping their customers shape a better life. In 2012, Bouygues Construction generated sales of 10.6 billion euros.