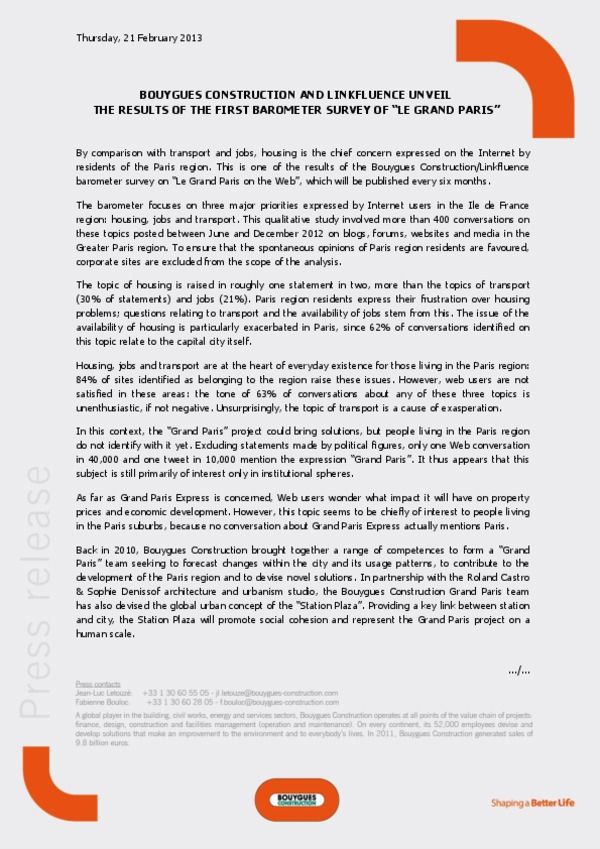 By comparison with transport and jobs, housing is the chief concern expressed on the Internet by residents of the Paris region. This is one of the results of the Bouygues Construction/Linkfluence barometer survey on “Le Grand Paris on the Web”, which will be published every six months.

The barometer focuses on three major priorities expressed by Internet users in the Ile de France region: housing, jobs and transport. This qualitative study involved more than 400 conversations on these topics posted between June and December 2012 on blogs, forums, websites and media in the Greater Paris region. To ensure that the spontaneous opinions of Paris region residents are favoured, corporate sites are excluded from the scope of the analysis.

The topic of housing is raised in roughly one statement in two, more than the topics of transport (30% of statements) and jobs (21%). Paris region residents express their frustration over housing problems; questions relating to transport and the availability of jobs stem from this. The issue of the availability of housing is particularly exacerbated in Paris, since 62% of conversations identified on this topic relate to the capital city itself.

Housing, jobs and transport are at the heart of everyday existence for those living in the Paris region: 84% of sites identified as belonging to the region raise these issues. However, web users are not satisfied in these areas: the tone of 63% of conversations about any of these three topics is unenthusiastic, if not negative. Unsurprisingly, the topic of transport is a cause of exasperation.

In this context, the “Grand Paris” project could bring solutions, but people living in the Paris region do not identify with it yet. Excluding statements made by political figures, only one Web conversation in 40,000 and one tweet in 10,000 mention the expression “Grand Paris”. It thus appears that this subject is still primarily of interest only in institutional spheres.

As far as Grand Paris Express is concerned, Web users wonder what impact it will have on property prices and economic development. However, this topic seems to be chiefly of interest to people living in the Paris suburbs, because no conversation about Grand Paris Express actually mentions Paris.

Back in 2010, Bouygues Construction brought together a range of competences to form a “Grand Paris” team seeking to forecast changes within the city and its usage patterns, to contribute to the development of the Paris region and to devise novel solutions. In partnership with the Roland Castro & Sophie Denissof architecture and urbanism studio, the Bouygues Construction Grand Paris team has also devised the global urban concept of the “Station Plaza”. Providing a key link between station and city, the Station Plaza will promote social cohesion and represent the Grand Paris project on a human scale.

Linkfluence, the European leader for Social Media Intelligence, enables brands to listen to and analyse the growing number of conversations on the Web and transforms them into recommendations and actions. Its Radarly platform monitors millions of conversations each day in more than 50 languages, analyses their content and virality and makes them accessible using an innovative dashboard system including CRM, KPI, community management, marketing insights, PR, etc.

As part of its DynamiCité programme, dedicated to the Paris metropolis seen by the Web, Linkfluence has associated with Bouygues Construction to uncover local issues and the expectations of Internet users.